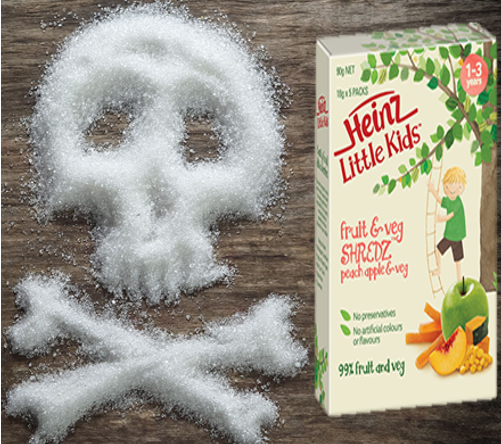 The saying “don’t judge a book by its cover” is sickly clichéd. It holds little meaning when heard in passing conversations in the street, or when that (we don’t say it out loud) “condescending” relative of ours uses it like a golden prophecy, simply due to its overuse.

However, we find ourselves rolling our eyes at another example of the cover being misleading, and the deceptiveness of big companies against the layperson back in the spotlight.

This is not where it ends for the Heinz toddler food trial, which continues in the Federal Court in Adelaide.

Consumer watchdogs set out for blood when our innocent youth are at risk. And especially when it involves our precious little Jimmy or Jane’s health.

According to the Australian Competition and Consumer Commission (ACCC) who have brought the action against Heinz on behalf of these watchdogs, the ‘Little Kids Shredz’ range of fruit bars are not all what they seem.

Packaged in natural brown tones and displaying fresh fruit with a happy cartoon child playing under a bright green tree, these bars, targeted at toddlers as a “convenient snack”, contain a grotesque 60% sugar. To put that in perspective, you’re better off giving your toddler what they throw a tantrum about at the check-outs: a chocolate bar.

To make matters worse for Heinz, they state on the packaging in question: “Our range of snacks and meals encourages your toddler to independently discover the delicious taste of nutritious food.”

The ACCC even took it as far as requesting Justice Richard White who was hearing the matter, to taste one of the bars for himself. This stunt however did not gain them any further ground with Justice White refusing on grounds of objectivity.

In a rather amusing rebuttal from counsel for Heinz, there was suggestion that Justice White did not have the palate of child aged 1-3.

As the trial continues, the question remains as to whether misleading and deceptive conduct has occurred to our health-conscious caregivers, and whether the sweet tooth of Heinz finally gets the cavity of justice?

If you have queries about commercial matters in Australia, or any other legal matter, then please do not hesitate to contact one of our experienced and expert lawyers on (07) 4795 1114.