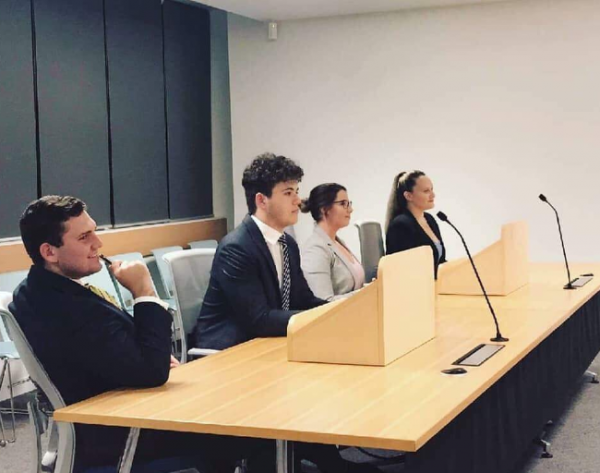 The past month has been a big one for our firm with some new faces, lots of new interesting cases and some big wins.

Firstly, we have been joined by three new paralegals – all of whom are studying Law at James Cook University.

The first to come on board was Damon Johnson. Damon is presently in his first year of university and attended Pimlico State High School right here in Townsville.

Also starting with us this month were Stephanie Weidemann and William Hunter. William is a local lad who attended Townsville Grammar and is now in the second year of his law studies while Stephanie brings with her a wealth of experience having previously served in the defence forces.

Coincidentally last week Damon and Steph faced off in the university mooting competition (where they pretend to go to court) with Damon emerging victorious and taking out the Best Individual Speaker Award on the day – although we’re reliably informed Steph is set to file a strong objection.

In other news, our much-loved solicitor Anthony Sturgeon marked a major milestone with five years ticking by since he was admitted as a solicitor.

Anthony has had some big wins in the legal arena in the past month and he’s also been making headlines in the local media with an appearance on Channel 7 and in the Townsville Bulletin.

And while our family lawyer Robert Ballais and our key commercial lawyer Steve Hodgson have also been enjoying some big wins in the legal arena they might be needing some luck on the basketball court.

The pair have been hotly contesting the A Reserve Men’s Championship Season on Wednesday nights with their team the Whirlwinds set to make the finals.

However, while the competition leaders have been averaging more than 20 points a game Mr Ballais has a meagre average of six points.

But, as Rob happily pointed out, he’s better at basketball than Steve who is second in the league for personal fouls.

Also in the sporting arena the boss Justin Ireland and yours truly (marketing manager Lachlan Thompson) have been training hard to do a three-kilometre open ocean swim on Magnetic Island.

Obviously “training” and “hard” are subjective terms – so far, we have swum a few laps, once.

Our legal secretary Casey Wilson has been smashing it in the gym and even took out second place in the Townsville Central F45 eight-week-challenge.

And last but not least our key accounts person, Francina De Chazal is presently in Hobart enjoying the Tasmanian sites and cuisine.